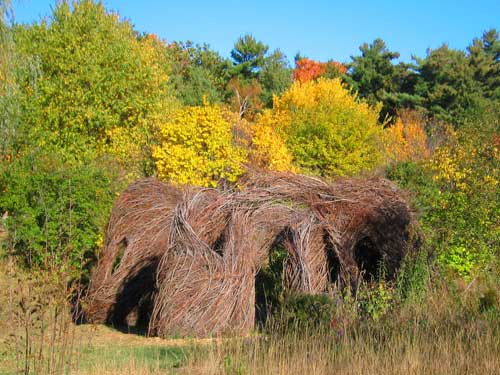 I consider this one of the funnest and most interactive exhibits of the lot. This is because you can wander around the work, go inside the structures, and even peer out through the windows.

The installation was in a glen in the arboretum, so it was not visible until you start to get near it. As it came into view for the first time, I am sure it would elicit an immediate response in the viewer: What is it? The viewer could then follow up their curiosity with an intimate investigation. Even those who make no attempt to understand art can probably relate to this exhibit.

I enjoyed building a sapling sculpture in the Barrie Arboretum. My site, nestled in the grass and wildflower area down the hill from the more formal flower beds, is a dog-walker's paradise and provides an intimate, yet well traveled, setting for a sculpture made form natural materials.

Inspired by the bird nests, which are plentiful in the lilac bushes adjacent to the site, and by a description of the area's aboriginal villages from long ago, I conceived a group of intertwined shelters fashioned to capture the interest of passersby and to offer an imaginative hideaway for children and adults alike.

Saplings are a familiar backyard material, which are not only used by children at play but have figured significantly into the architecture of transient peoples since the beginning of time. The actual construction process is not a sedate studio activity but instead uses the entire body to bend, insert and pull saplings into a pleasing configuration. Although my original paper sketch and a small paper model guided me, improvisation is an important part of my process, and I have learned to take advantage of the unexpected.

To carry this ancient activity beyond the realm of rude hut building and into the context of contemporary art making, I focused primarily on saplings as a group of natural lines with which to sketch out my ideas in a three dimensional way. As I worked, I imagined co-opting the forces of nature and using drawing techniques to give the sensations of scoring, sheering, and rambunctious twisting on the surfaces of my sculptures. The saplings are added in layers and I work in three phases: structural, aesthetic and finally cosmetic.

First I formed the shape from the primary uprights and then used a variety of sapling sizes, to build a randomly woven structural base. This substructure was my canvas on which I added thousands of intertwined stick lines and attempted to sketch out my idea in a powerful way. Finally I polished the work by adding small limbs to cover blemishes and adjusting the minor flaws.

As the work progressed, passersby stopped to comment on the sculpture and reminisce about their own childhood forts and secret places. They reflected on the park's flower gardens, the winter experience of skiing and walking in the nearby woods and their unbridled enthusiasm for the natural world. It reminded me that as a child I was encouraged to roam the wooded area behind my house. I spent many hours playing with my brothers and sisters, building bowers and scrap shacks from foraged limbs. When I turned to sculpture in the early 1980s, I remembered those early forays in to the underbrush and again began experimenting with saplings as a material for sculpture in my own backyard.

When the final lines were put in place and all the vagrant sticks adjusted, those who worked on the sculpture were asked to sign my gloves, which in the world of flowerbeds and temporary sculptures will remain the only permanent record. Many visitors came by to see the completed work, and I asked someone about the general Friday afternoon hubbub on highway 400 that bisects Barrie. The traffic was explained as a mass exodus of weekenders going to cottage. All of a sudden my hideaways in the arboretum seemed more relevant. I imagined cars full of restless families enduring the ride from Toronto in order to dodge urban life and find relief in the untamed places to the north. Thanks to the Arboretum, Barrie residents will never go stir crazy, and thanks to the MacLaren's summer sculpture initiative visitors to the Barrie Arboretum's grass garden can enjoy a good case of Cabin Fever.